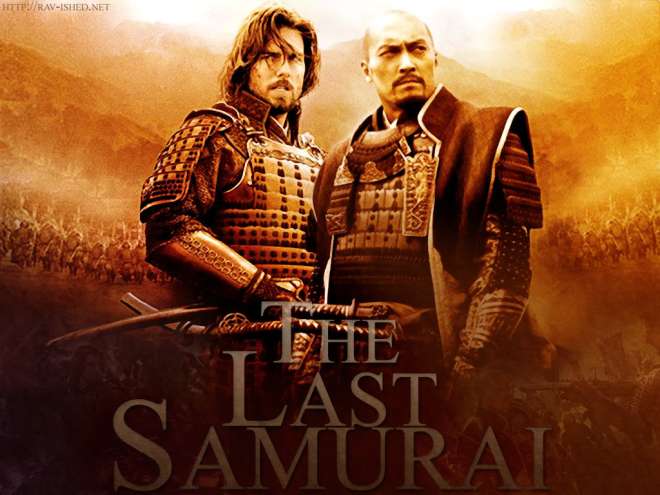 This is our blog’s first review. As mentioned in the welcome post, there is no order to the reviews we will post. Whatever we watch we will write a review about it.

The Last Samurai is a 2003 film. This is perhaps my fourth or fifth time watching this film. It never gets old or boring. I really enjoy watching this film because of how much I respect and admire the Japanese and their way of life back then and even today.

I come from a German mother so discipline and order is in me and they are one of the things that define me as a person and my way of life. So when I watch films about the Japanese, for example, and how disciplined they are in everything they do, I can relate and it draws in my attention and interest.

The film’s plot is set around 1877 in Japan during the real life Satsuma Rebellion but in the film’s case the rebellion is led by a samurai called Katsumoto Moritsugu while in reality it was led by Saigō Takamori. US Army captain Nathan Algren is a Civil War veteran who is haunted by the killings he participated in during the Indian Wars and so turns to alcohol. He is offered a job to train the Imperial Japanese Army, to suppress the samurai rebellion, which he accepts. Not having enough time to train the men, Nathan and his soldiers are forced into a battle against the rebellion by orders of a Colonel Bagley. This battle becomes unsuccessful and Nathan is captured and taken prisoner by the rebellion after killing many samurai. During the battle, leader Katsumoto notices how Nathan fights and kills the samurai and decides to take him and learn from him as his enemy.

The film is an emotional one. There were many scenes that teared me up. We see how Nathan battles with himself for the atrocities he and his commanding officer Colonel Bagley did. Nathan is taken care of by Taka, Katsumoto’s sister and lives with her and her family. Once recovered, Nathan visits Katsumoto and it is here we find out that one of the samurai that Nathan killed was Taka’s husband. Katsumoto explains that defeat is not an option for the samurai and that the death of his brother in law was a good death. We can tell by these comments that the samurai customs are very strict and have some form of respect to them.

I have read before that many people have said that Tom Cruise cannot act and his performance in this one was funny. I cannot understand these people because for me he did an excellent job playing a troubled soldier, falling in love with the life of the enemy, eventually fighting his own country and defending his now new home. It’s a great role and Tom, in my opinion, did really good.

To hear that Taka considers an honor having Nathan, the man who killed her husband, as a guest in her home shows how different their customs are and I believe that that requires a great deal of respect and forgiveness.  At first she dislikes him but it wasn’t until Nathan discovers about her husband, and apologizes, that she started to like him. Even so, I don’t think most people could be able to do this, letting their loved ones’ killer in their homes.

Nathan overcomes his alcoholism, forgives himself and begins to learn the samurai way of life. We can tell he is soon no longer their enemy and they accept him as one, after he helps fight off a ninja attack against Katsumoto sent by the emperor’s right hand (I guess that’s what he was).

The two saddest scenes for me was when Katsumoto had to say goodbye to his dying son, and Katsumoto dying in the arms of Nathan on the battlefield, seeing and telling him how perfect the blooming flowers are.

There’s a lot of pride in the samurai because of their ways, and some may find that dumb or stubborn in some situations, but I find it beautiful and respectful because it is their ways and it is what defines them. They are just being themselves and I admire that.

The music score by Hans Zimmer was incredible. Beautifully composed and sets the mood for each scene really well. You can feel what each actor is going through based on the music playing and that is a sign of a successful composer and storyteller (director Edward Zwick). Hans Zimmer is a legend and nailed it in this film!

Thank you for reading my review! 🙂