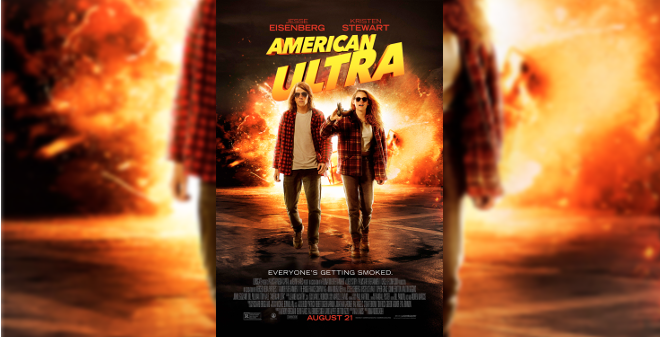 American Ultra is an R-rated 2015 action comedy film directed by Nima Nourizadeh and written by Max Landis. This is the director’s second film, his first being Project X. American Ultra stars Jesse Eisenberg, Kristen Stewart, Topher Grace and Connie Britton. It tells the story of a pathetic stoner who is in fact a CIA agent but had his memories of one, erased. When marked as a liability and targeted for extermination, Mike Howell gets “activated” and unleashes his deadly skills on those who try to end him. This idea has been played with before like the Jason Bourne trilogy (not that garbage The Bourne Legacy), except the concept of a comedic twist to it sounds interesting and the trailer itself looked good. Unfortunately, that was it; the whole film felt like it could have been much better.

Seeing the trailer, the first thing that popped into my head was the TV series, Chuck. Same idea, with humor that lasted a few seasons. It was a good watch. So thinking about a movie version, one where the protagonist is a stoner, where you can really pull off an exciting action movie with a display of all sorts of skills, not just combat, you’re thinking that it’s worth a shot to see what someone has created and released for the whole world to see. He’s high all the time so the dialogue is probably funny; that mixed with possible cool-looking choreographed fights sounds like a fun idea! But it leaves you feeling unsatisfied. As soon as there’s danger, the character’s pupils enlarge, so you know it’s about to go down, but the action isn’t good enough or “CIA agent” enough.

The humor also was lacking. Remember Pineapple Express? That film was hilarious when it first came out (and still is after watching it 7 times). But then again when Mike Howell gets “activated” he becomes the CIA agent and leaves the stoner persona which is a big shame. More jokes about being high or hallucinations would have been funnier.

The whole air of the film had an amateur feeling to it like it was trying too hard to please. Nonetheless, the acting by Jesse Eisenberg and Kristen Stewart were great. Their chemistry together works well. I’m not so convinced about Topher Grace. He also tried too hard or at least that’s what it looked like. Everyone else just didn’t seem to be interested in being in the movie. Except for John Leguizamo’s character, Rose, who was the funniest. There are some chuckles here and there, but nothing like I was expecting from a stoner agent.

I do want to say that it had some very nice camera angles. At times the cinematography looked very realistic and professional, which made the movie look good from the beginning but was later ruined from sloppy writing and directing. I don’t like the feeling of wanting more out of a movie when it’s finished. It lacked satisfaction.

It could have been much better.