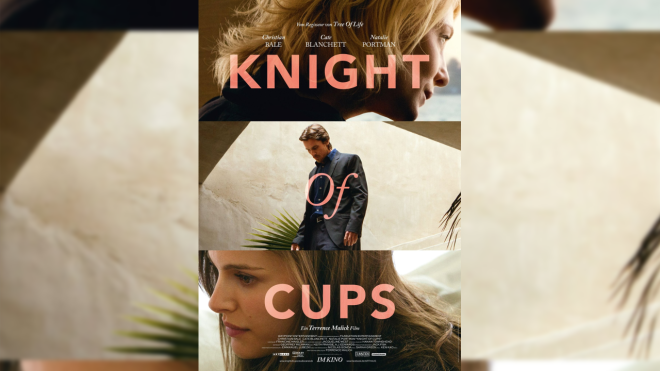 Knight of Cups is a 2015 R-rated experimental film written and directed by Terrence Malick, starring Christian Bale, Cate Blanchett, Freida Pinto and Natalie Portman. Basically, it’s about a man (Bale) trying to find his place in the world going through the strange events happening around him. While successful in his career, he feels empty inside and surrounds himself with women and the Hollywood scene that become a temporary distraction from depressing family issues and his ongoing questioning existence. You know how you watch one video on YouTube and then another and so on in the Related Videos sidebar? That’s how I stumbled upon Knight of Cups. The trailer intrigued me with its many different unsteady shots and interesting imagery. The whole air of it told me that this was no ordinary film and that you’d have to pay close attention to it, to understand its deeper meaning, and that fascinated me and I challenged myself to watch the almost two-hour film with the hope of coming up with my own interpretation. Sadly no such thing happened.

It started good and I was looking forward to solving the mystery behind this project, until about half way through when I realized that I probably would never get to that… Seriously, what the hell is going on here? Remember Tree of Life (2011)? Some said it was a masterpiece and others a waste of time. I saw it and felt like it’s somewhere in the middle. Well it’s the same director, only in this one, god knows what was going through his mind. I love complicated films; I love psychological films. When Enemy (2015) came out, I went nuts on writing my review and my various interpretations. But with Knight of Cups, I left the film feeling empty, confused, and disappointed. I feel like there’s something big going on here. I feel like I missed out on something and at the same time I don’t and regret that I wasted almost two hours on this thing. There is no meaningful plot. Yes, we get that he’s trying to find his place in this world, but the shots don’t suggest that. While there are chapters shown to us as white titles on a black screen, they make no sense to the “story.” It didn’t even feel like a two-hour commercial as many reviewers had mentioned.

“That’s it? That’s how it ends!?” – frustration seeping in… Unfortunately I am not a fan of Malick’s work nor did I understand what he tried to portray in this film.

If you’re a regular moviegoer then don’t watch this because it will confuse the hell out of you and you’ll regret spending your time and money. If you like a real challenge in movie decoding, I highly suggest this one to pick your brain and leave its experimental mark on you.